This is Brandi, my 9 year old daughter's Mountain Cur.  She gave her life Monday afternoon to save ours.  At approximately 7:15 pm a man entered our back yard.  I believe he was attempting to enter our home from our back entrance because the fence blocks the views from all streets.  Brandi defended our home to her best ability and unfortunately this criminal took her life.  About 7:25, I drove home, with my son.  I believe I probably scared him away when I drove up.  I noticed nothing wrong at the time and I took Wyatt in the house and put him in his highchair while I went back to the car to get his food.  When I got in my carport, I noticed something was strange about the dogs.  My other Mountain Cur was trying to help Brandi or get my attention to let me know something was wrong.  When I saw her laying there I knew something horrible was happening.  She did pass soon after.  As time has passed, I know in my heart that man would have been in my home when Wyatt and I got home if Brandi had not defended our home.  Had she not given her life, I feel certain that Wyatt and I would have been hurt.  My heart hurts that she is gone but so grateful that she protected us.  As a family we are hurting right now and Bella is devastated that her dog is gone.  She will be missed and truly thought of as a hero forever. 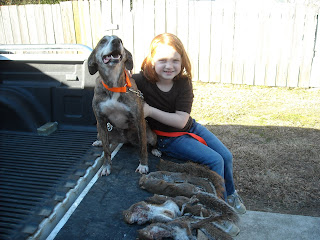 Well summer has started and we have been having some HOT days.  This summer we started some new things!  With Wyatt we are becoming more comfortable with cathing.  We are working hard towards wearing big boy undies!  He is also standing a LOT more and Dr. Haber, his ortho surgeon, said he will be walking in no time.  He even increased his therapy to 2-3 times weekly.  We are so happy and he is really loving the therapy time now.  He loves day care and loves his friends there.  Bella made us so proud by showing and riding her horse in her very first 4H show in June.  We were so happy and her team even won first place in judging.  This will be known as our summer of casts!  Wyatt was in one for 8 weeks and on July 5th, Bella was thrown from a horse on her left arm.  She mostly complained of wrist and hand pain so that is what the ER xrayed.  SOOO, 2 weeks later as her elbow is STILL swelling, we take her to her pediatrician and he does an xray that we JUST KNOW is gonna be fine! Yeah right! Fracture to the left elbow! Wow! So it looks like our lives will remain very interesting for a while and not to mention we decided to try to sell our house!  Sometimes I feel like I am watching our life speed by in front of me and I am just holding on for dear life taking the sharp turns as they come!
Jenny

Hope you enjoyed the pictures!
Posted by Jenny at 10:40 AM 1 comment:

Ok, so my last post appears sort of confusing.  After I had posted my entire thing, somehow the blog fairies deleted most of it. So here is attempt #2.
Brandi, our Mountain Cur, probably gave her life for ours that day.  I apparently came home and interrupted an attempted home invasion.  He tried to enter through our backyard where he then encountered my dogs.  Brandi and Chi-Chi had both been attacked and unfortunately Brandi died in my husband's arms from her wounds.  I was alone with Wyatt and I know in my heart that man would have been in my home when we walked in had Brandi not fought him off.  I am still sometimes in shock about what happened and poor Chi-Chi misses her friend still.  I owe her my life and she will always be a hero to our family.  I would love to say there is a happy ending to this story but we are still waiting on evidence to come from the crime lab to put him in jail.  By the way he was also transferred to a trauma center to repair his FACE!  Let me just say, Brandi left her mark! So hopefully one day a happy ending of justice served.
Jenny

This weekend we had some amazing experiences.  We made new friends and I even got to meet and hang out with a mom I met on facebook that was able to bring her great family to the Spina Bifida conference.  The skatepark was amazing and Wheelz was even better!  It was so great to see him personally try to inspire these precious kids.  As a mother, all I can pray for is that one day Wyatt will be thankful that he was born with spina bifida, that he will know that God designed him specifically to be special and to find a blessing in that.  Aaron "Wheelz" has certainly found his blessing and is showing kids that nothing is impossible, even a 10 foot drop-in ramp at a skatepark when you are in a wheelchair. I mean, REALLY, what CAN'T you accomplish after you have done a backflip in a wheelchair!  Wyatt is still saying, "I gonna do a fip!"  I can already envision the bumps and bruises!  The conference speakers were great and it was not necessarily things we had not heard but maybe in different ways.  I realized that we all encounter some pretty scary things as parents of these children but it is so worth the journey.  During this LONG trip to Kentucky, I remember thinking to myself if it was worth going all this way for a 1-day conference.  While we were there and Wyatt was at his Kid's Camp, I realized Wyatt was in a room full of children and he wasn't the only one crawling, he wasn't the only one taking meds, he wasn't the only one that needed braces for the paralysis in his legs and feet.  Usually he is the minority at home, the daycare or church but NOT HERE.  Kids of all ability playing together, supporting each other but MOST importantly, just being KIDS!  Was it worth it?  HECK YES! For even that one day for Wyatt to feel like he is part of a group was amazing and that was my AH-HA moment! More pictures will be coming but Jim has the camera right now to document Isabella's first home that we still have.  The Cabin.  The Mississippi River is flooding and we will likely lose it to the flood so we are taking pictures for insurance purposes but also for memories because this place will always be special to Bella and it hurts her to think it may be gone soon (us too!)  I will post more pics later!
A HUGE thanks to Colleen for putting on the SBAK conference.  I know it was hard work, but SO worth it for us!
Jenny
Posted by Jenny at 2:22 PM 1 comment:

Ok, so I have been made painfully aware that I have not posted in a LONG time! I will not name any names!  I really can not explain it but I have just lost my mojo.  We have really had some busy times too.  Wyatt had his tendon surgery and we looked at that surgery as one step closer to walking only to have it blow up in our face.  After the 6 weeks of a cast and it was removed, with in 24 hours his little leg was so swollen.  Requiring an emergency trip back to the Orthopedic surgeon during a tornado that devastated a town 10 miles away, an x-ray was taken that also like a tornado devastated my world.  Osteoporosis so bad that it could possibly be hiding a small fracture.  So back in a cast we went.  I know that I should have been looking on the bright side of things and I usually do but when you hear those words about your 2 year old precious angel that wants to play ball with his big sister so badly, it was like a kick in the gut.  So now 2 more weeks of a cast and all I can help feel is this is a delay of our walking.  We have also joined the cathing world and it is a big adjustment but I think I can already see that we will be successful with it.  That is all I really want to say about that right now because I am still trying to wrap my mind around this reality of ours.  So funny that only 2 short years ago I was standing in the NICU saying, I guess bargaining with God, saying that if all we have to do is cath, then I can live with that but I can't live with out my sweet man, so please God let him live.  And LIVE he has, not one day he doesn't smile, laugh and love.  He loves big too, like he LOVES big trucks, police cars (or he says po-po), and school buses, he loves his tag (blanket), he loves baseball and thought he was going to explode when his favorite aunt took him ON THE FIELD after his big sister's game.  I SO want to love like him too.  Love BIG, live life that way too and all the rest in the middle just will fall in place as God has designed.  As a family, we will go to Louisville, Kentucky next weekend for a Spina Bifida conference.  We are so excited!  I can not wait to get to sit in a room full of moms, dads, brothers and sisters and kiddos that are kicking Spina Bifida's butt!  A room full of people that just get it!  So hopefully I will update after our trip! So long!  Love Big Today!
Jenny 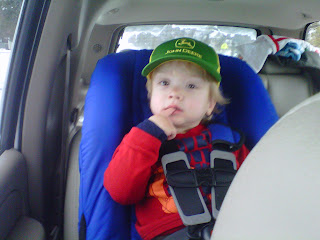 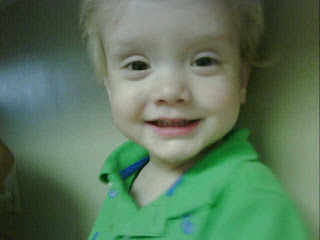 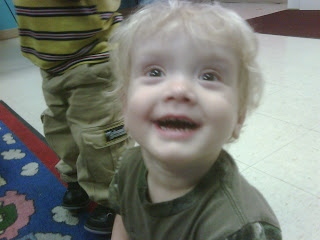 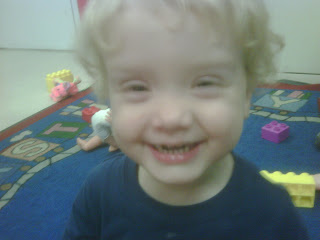 Bella, Jim, me and my dad went to the horse shows this weekend.  We wanted one last weekend with Bella before EVERYTHING is focused on Wyatt.  We had a blast and really enjoyed watching those beautiful horses that we have all grown to love.  When we were there I noticed a boy in a wheelchair.  In my heart I knew he had spina bifida.  I got near his mother and could not stop myself from asking her if she minded me asking her some questions about her son.  She said "No, that will be great!"  I then froze! The next thing I said was "He has spina bifida doesn't he?"  She said "Yes he does." And then we acted like we were long lost friends and began talking for another 30 minutes!  Isabella was probably ready to choke me!  It was so comforting to see a family that has walked our path and Spina Bifida is about the least significant thing about their life.  I am so glad that God placed us together and we were able to meet and share this bond of a diagnosis.  As the day went on, I would see him wheeling around, happy, smiling and just being a kid!  My heart smiled at that because I know Wyatt will be okay.  Monday he is scheduled for surgery to lengthen his Achilles tendon on his right foot.  This means he will have an above knee cast for a total of 6 weeks, it means he will be cranky and grouchy, he will have more limited mobility than he is used to but it also means he will hopefully be well on his way to walking.  We have so many people praying for us and all I can say is "Thank You" and keep them coming for the road ahead of us.
Jenny
Posted by Jenny at 9:09 AM No comments: